FROM CITY TO REGION | URBNETLAB

FROM CITY TO REGION 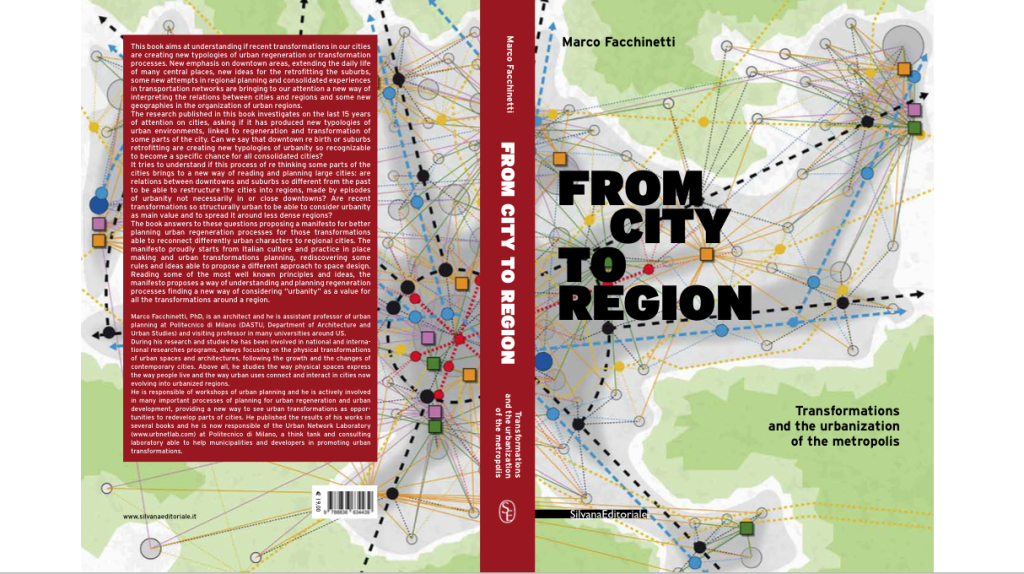 “From City to Region. Transformations and the urbanization of the metropolis”
Marco Facchinetti – Hardback – April 2016

This new book aims at understanding if recent transformations in our cities are creating new typologies of urban regeneration or transformation processes. New emphasis on downtown areas, extending the daily life of many central places, new ideas for the retrofitting the suburbs, some new attempts in regional planning and consolidated experiences in transportation networks are bringing to our attention a new way of interpreting the relations between cities and regions and some new geographies in the organization of urban regions.

The research published in this book investigates on the last 15 years of attention on cities, asking if it has produced new typologies of urban environments, linked to regeneration and transformation of some parts of the city. Can we say that downtown re birth or suburbs retrofitting are creating new typologies of urbanity so recognizable to become a specific chance for all consolidated cities?

It tries to understand if this process of re thinking some parts of the cities brings to a new way of reading and planning large cities: are relations between downtowns and suburbs so different from the past to be able to restructure the cities into regions, made by episodes of urbanity not necessarily in or close downtowns? Are recent transformations so structurally urban to be able to consider urbanity as main value and to spread it around less dense regions?

The book answers to these questions proposing a manifesto for better planning urban regeneration processes for those transformations able to reconnect differently urban characters to regional cities. The manifesto proudly starts from Italian culture and practice in place making and urban transformations planning, rediscovering some rules and ideas able to propose a different approach to space design. Reading some of the most well known principles and ideas, the manifesto proposes a way of understanding and planning regeneration processes finding a new way of considering “urbanity” as a value for all the transformations around a region.

Tagged with:     city to ragion